Are e-cigarette flavorings toxic to the heart?

A new study investigates e-cigarettes’ impact on the heart.

New research, published in Arteriosclerosis, Thrombosis, and Vascular Biology, concludes that the chemicals used to create these flavours could be damaging blood vessels and the cells that line the inside of the heart.

Electronic cigarettes (e-cigarettes) were first introduced to the United States in 2006 and were marketed as a safer alternative to cigarettes.

These battery-powered devices heat a liquid solution that is then inhaled by the user. However, e-cigarettes can still contain nicotine and some of the chemicals used in regular cigarettes.

Since their introduction, they have gained popularity and are widely used as an alternative to smoking traditional tobacco products. They are often used to help people quit smoking with the belief being that they offer fewer health risks.

They have also gained popularity among young people. According to the Centers for Disease Control and Prevention (CDC), there was an increase in middle and high school students using e-cigarettes from 2011 to 2016.

However, they are not recommended for use by the American Heart Association (AHA), who instead advise people to avoid the devices. The AHA believes that e-cigarettes containing nicotine should be subject to the same laws as traditional tobacco products.

Effects on the heart

This new study was led by Dr. Jessica L. Fetterman, of the Boston University of Medicine in Massachusetts. Dr. Fetterman and her team wanted to test the effects of these chemical additives on blood vessels and the heart. 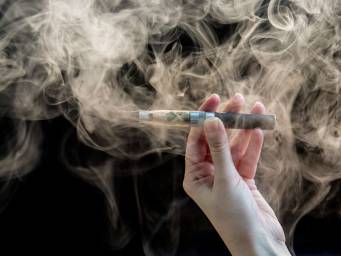 The pros and cons of e-cigarettes revealed

Dr. Fetterman and her team looked for short-term effects of e-cigarette flavourings on the cells that line the blood vessels and the inside of the heart, known as endothelial cells.

The researchers gathered the endothelial cells from the participants and exposed them to different chemical flavourings. They demonstrated that all nine flavours impaired nitric oxide production in endothelial cells.

However, some flavours produced higher levels of inflammation and caused a more significant reduction in nitric oxide production.

Dr. Fetterman says, “Increased inflammation and a loss of nitric oxide are some of the first changes to occur leading up to cardiovascular disease and events like heart attacks and stroke, so they are considered early predictors of heart disease.”

“Our findings suggest that these flavouring additives may have serious health consequences.”

“Our work and prior research have provided evidence that flavorings induce toxicity in the lung and cardiovascular systems. Flavorings are also a driver of youth tobacco use and sustained tobacco use among smokers.”

Dr. Fetterman and her team directly tested the effects of the flavourings at the levels likely to be reached in the body. However, she also makes the study’s limitations clear; for instance, they only tested the short-term effects, and the study “did not heat all the flavourings or include other chemicals used in e-cigarettes.”

There is still much more to explore; as Dr. Fetterman says, “We still don’t know what concentrations of the flavourings make it inside the body.”